Probably the oldest food law in the world 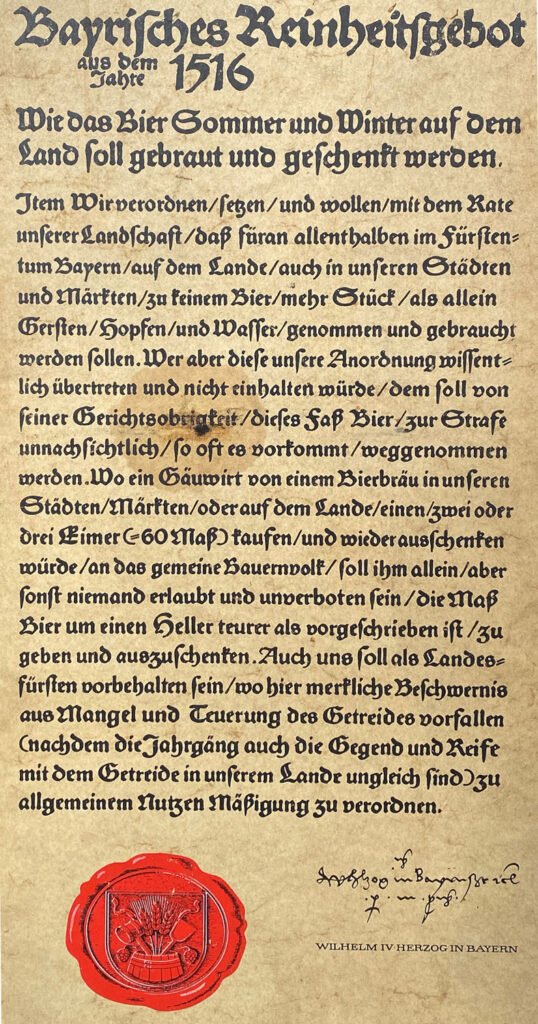 The Reinheitsgebot sometimes called the “German Beer Purity Law” or the “Bavarian Purity Law” in English is a regulation concerning the production of beer in Germany.

In the original text, the only ingredients that could be used in the production of beer were water, barley, and hops.

The law originated in the city of Ingolstadt in the duchy of Bavaria on 23 April 1516, although first put forward in 1487 concerning standards for the sale and composition of beer.

The actual Purity Law is a result of the Bavarian Duke, Wilhelm IV. He erected the law at the Ingolstadt Parliament in 1516. The reason to institute such a law was mainly the quality of “Beers” at that time. Then spices used were fruits, herbs, weeds such as anis, myrtle, oak leaves, ivy (poisonous), along with the seeds of lemon, raspberries, elderberry etc… were normally used for brewing.

Thereby, there were certain reasons for these uses. As an example, some ingredients were used as a substitute for hops, others for the intoxicating effect (many death cases among the population), others to extend the shelf life.

In the original text, the only ingredients that could be used in the production of beer were water, barley, and hops. The yeast has been added later on.

Note that no yeast was mentioned in the original text. It was not until the 1800s that Louis Pasteur discovered the role of microorganisms in the process of fermentation; therefore, yeast was not known to be an ingredient of beer. Brewers generally took some sediment from the previous fermentation and added it to the next, the sediment generally containing the necessary organisms to perform fermentation. If none were available, they would set up a number of vats, relying on natural yeast to inoculate the brew.

We use cookies on our website to give you the most relevant experience by remembering your preferences and repeat visits. By clicking “Yes”, you consent to the use of all cookies. This webpage is using Google Fonts.
Ja / Yes Ja, Alle / Yes, all Cookie settings Nein / No
DSGVO/GDPR

This website uses cookies to improve your experience while you navigate through the website. Out of these, the cookies that are categorized as necessary are stored on your browser as they are essential for the working of basic functionalities of the website. We also use third-party cookies that help us analyze and understand how you use this website. These cookies will be stored in your browser only with your consent. You also have the option to opt-out of these cookies. But opting out of some of these cookies may affect your browsing experience.
Advertisement
Advertisement cookies are used to provide visitors with relevant ads and marketing campaigns. These cookies track visitors across websites and collect information to provide customized ads.
Analytics
Analytical cookies are used to understand how visitors interact with the website. These cookies help provide information on metrics the number of visitors, bounce rate, traffic source, etc.
Functional
Functional cookies help to perform certain functionalities like sharing the content of the website on social media platforms, collect feedbacks, and other third-party features.
Necessary
Necessary cookies are absolutely essential for the website to function properly. These cookies ensure basic functionalities and security features of the website, anonymously.
Others
Other uncategorized cookies are those that are being analyzed and have not been classified into a category as yet.
Performance
Performance cookies are used to understand and analyze the key performance indexes of the website which helps in delivering a better user experience for the visitors.
SAVE & ACCEPT
Powered by