Beer is an alcoholic beverage obtained by the fermentation or extracts of malted cereals, principally barley, and flavoured with hops and sometimes a percentage of maize and rice. British beer varies from 100% malt to 70% malt plus 30% unmalted cereals, together with sugar, hops, yeast and water.

The “Reinheitsgebot” states that , the only ingredients that could be used in the production of beer were water, barley and hops.

More about the “Reinheitsgebot” 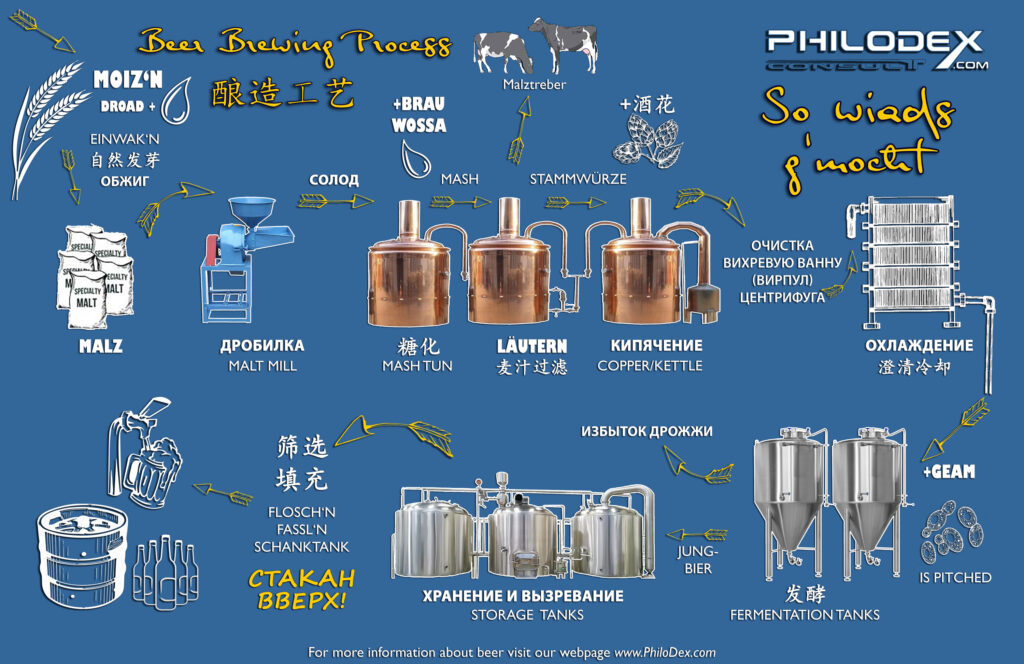 Most important ingredient for beer – its chemical composition is essential for the taste and the character of the beer. It must be clear, free from any aromatic substances, soft and colour- and odour-less. It has to fulfil the high standards of drinking water. In most countries water has to be treated (softened), filtered or even chemically purified.

Malt is made of grains like barley or wheat. During malting, the grains are steeped in water and brought to germination. After one week of growing, it is dried, kilned or roasted. Now, it can be used for brewing beer. After roasting, it develops the typical malt-flavour which gives especially the dark beers their original taste.

Hops is used in a very low amount to season the beer and create a typical beer- and hops-aroma. Hops is a herb, which is also antibiotic effective against many germs and is useful for tranquillising the nerves.

Yeast is a germ, which is able to ferment sugar into alcohol and carbon dioxide. It is re-generating itself up to 6 or 7 times during the fermentation phase and can be harvested for the next use.

The whole grain malt is crushed and grounded to grist and flour. Malt grist is mashed with warm water under heavy steering. The mash is held at several temperature levels and heated up to about 80 °C.

Mash is pumped into the Lauter tun, strained and filtered. Lautering separates the liquid part from the insoluble part: the wort from the spent grains. Spent grains are removed.

Hops is being added while the wort boils heavily for approx. 1 1/2 hours.

The hot wort is cooled down to 8 °C, otherwise the yeast would be killed in the hot liquid.

The cooled, clarified wort is then subjected to top or bottom fermentation in open or closed containers with the addition of yeast. The fermentation starts immediately and takes up to 7 days. The young beer has to be kept cold at about 7 to 9 °C. The sugar is fermented to alcohol and carbon dioxide.

After the main fermentation, the young or “green” beer is pumped into storage tanks, where the final ageing and post-fermentation takes place.

The clearing and development of the final taste, colour, freshness and odour begins.

The yeast settles down. The beer is kept under pressure at the freezing point (0 °C).

After 3 weeks of ripening, the beer is ready for consumption and can be served without any further treatment.

Fresh beer is still containing yeast which results in a cloudy appearance.

We use cookies on our website to give you the most relevant experience by remembering your preferences and repeat visits. By clicking “Yes”, you consent to the use of all cookies. This webpage is using Google Fonts.
Ja / Yes Ja, Alle / Yes, all Cookie settings Nein / No
DSGVO/GDPR

This website uses cookies to improve your experience while you navigate through the website. Out of these, the cookies that are categorized as necessary are stored on your browser as they are essential for the working of basic functionalities of the website. We also use third-party cookies that help us analyze and understand how you use this website. These cookies will be stored in your browser only with your consent. You also have the option to opt-out of these cookies. But opting out of some of these cookies may affect your browsing experience.
Advertisement
Advertisement cookies are used to provide visitors with relevant ads and marketing campaigns. These cookies track visitors across websites and collect information to provide customized ads.
Analytics
Analytical cookies are used to understand how visitors interact with the website. These cookies help provide information on metrics the number of visitors, bounce rate, traffic source, etc.
Functional
Functional cookies help to perform certain functionalities like sharing the content of the website on social media platforms, collect feedbacks, and other third-party features.
Necessary
Necessary cookies are absolutely essential for the website to function properly. These cookies ensure basic functionalities and security features of the website, anonymously.
Others
Other uncategorized cookies are those that are being analyzed and have not been classified into a category as yet.
Performance
Performance cookies are used to understand and analyze the key performance indexes of the website which helps in delivering a better user experience for the visitors.
SAVE & ACCEPT
Powered by